SOCIAL DYNAMITE
“An unstable society is like a land mine that is waiting for someone to step on it to explode”.
Anthony Kiarie.
Our modern society is plagued by so many social issues that have a far reaching effect upon the people.  I call it an unstable society. The fact that many people in our society constitute young, energetic and unemployed youths makes things worse. Some are unemployed due to fate and ill luck, while others are just lazy. But all have one thing in common, they want to survive and to survive they have to. 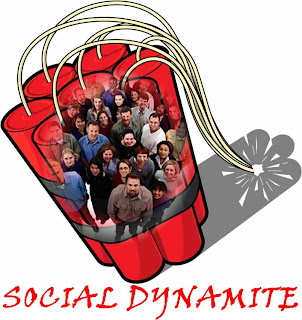 What is wrong?
Let us go back in time and see some of the things that have changed since. The olden day’s young people had so many factors that encouraged their creativity. There was no high-tech toys that are remote controlled as we have nowadays. A child would gather locally available materials and use them to make a toy of a car, a kite, an airplane etc. The child would have to sit down, think, and be creative in order to make a toy that resembles the perfect picture of what he has in his thoughts. The children would also compete to see who makes the best toy. The child would feel happy and contented to have invented his own home made toy.  Same case applies for the items they used for playing like footballs.  But due to advent of modern toys, children are no longer creative and this culture of wanting ready made goods grown with our modern children. This is making creativity a thing of the past and it’s not a wonder many young people are jobless and having nothing to do since their minds cannot create an idea and materialize it.

Media Brainwashing
Also consider the fact that nowadays there are so many channels that broadcast a perfect world of fantasy where people meet, fall in love and live happily thereafter. The soap operas have brainwashed the modern world young people into thinking that all that happens in the soaps are experiences you can encounter in reality. But look at this, these people are in business of making as much sales as possible from their dramatic series. There are well dressed handsome men who know how to treat ladies as to make them feel like angels. They know how to be romantic and always season their love with lots of flowers, cards, poems, sweet words etc. They are also always nicely dressed and perfectly groomed. Same applies for the ladies. They are well groomed and always seem to be wearing smartly and attractive. They know how to talk a word in its right time and even know when to kiss as to have a maximum effect of their kiss. But the reality in our world is simpler than that. If you happen to come from rural settings, you know what it means to get dirty due to the nature of the work there, oh! And to sweat too! Dating is also another issue where the modern brainwashed youths think that in order to impress a loved one, money has to play a big role. A woman who is doing her house hold chores is bound to get dirty too and guess what, some are not anyway attractive at that state, but that is reality. A question emerges, if love is free why is dating so expensive? This is all as a result of brainwashing from the media.
The media also has played part in the erosion of morals in the society. People are made to believe that an immoral, cold, emotionally reserved, womanizer of a gangster can later turn out to be a very caring, romantic and understanding man provided that he meets a beautiful girl who will miraculously change his behaviors. This has made many ladies fall victims to the allure of the bad boy. This is a perfect recipe for a series of broken hearts and some with devastating everlasting effects. Some ladies after falling for such are unable to trust a man again and labels men with names like “Dogs”, but who is to blame? Honestly, if you want a good thing, why not just go straight for it rather than trying to turn a bad thing into a good thing?

Love and Modern Technology
I think the modern technology has in a way made love cheaper. To arrange a date, you normally only have to call someone and arrange where to meet at a cost of not more than Kshs 50. During the past, a man had to prove his live for a lady by taking the time to go to the lady’s village and probably find a child and send him to call his girlfriend, all hoping that things will not go haywire and instead of the girl appearing, the brother or the father appears and the rest will not be an enjoyable encounter. Communicating by letters also served to keep faith, hope and love alive. When you got a letter from your man, you would reply and all along wait for it to reach to its destination, reach your man, he sits down and read, reply and this will take another one month for you to know if it really arrived. Such were the acts of proving our love to our sweethearts.  But along enters the mobile phone, people nowadays are not even able to write a love letter, and most SMSs that people send are pathetic, likely a copy pasted romantic SMS that does not even reflect your true feelings. I know of websites that has very sweet love SMSs and phrases freely available and many people simply copy and send them to their loved ones. This is emotional blackmail of the highest order. The gadget has also made it easier to have an affair. It’s common to find people who have phone numbers that their spouses do not know of. All in all, the devastating effect of this is having made love lose value. Dumping a loved one is only an SMS away.

Moral Degradation
The issue of morality has also become so controversial. Children no longer sit with their parents and enjoy meaningful conversations and get a handful of advices from their parents since everyone is busy. Some children are even sent to boarding schools at an early age and never have time with their parents. Religion which used to be a pillar of morality in our society has now become the source of greatest ridicule of all times. With clergy men who turn against their flock and deflower their growing girls, milk their last cent in the name of, “Panda mbegu ya imani”, people no longer see the church as a source of moral guidelines. With some clergy people also getting into politics, things have gotten worse since the political world is full of scandals of its own. This sends a strong signal that they are just after getting rich and care less about their flock. Islam has not been spared either. The recent series of events that link terrorism, hooliganism and political strife like the ones that occurred in coast province to key Islamic individuals has left many people thinking that Islam as a religion is an instrument of hostility in the society. Peace loving Muslims are beginning to lose faith in their own religion as they do not wish to be linked to those who are perpetrating evil in the name of Jihad. Looting public property and killing innocent people is not Jihad but a crime by proper name.
Children are regarded as blessings to our world. Irrespective of how someone gets pregnant, am totally against the idea of abortion. But look at this situation like this. Many children being born are born out of wedlock. Chances are also high that the mother is unable to fully provide for this child. So as the child is growing up, missing fatherly love and missing basic necessities of life, it ends up feeling that it was unwanted. The psychological effects may be fatal as this child may deviate and become anti-social later on in life. It is also true that most people who were brought up in unstable families have high chances of developing anti-social behaviors than those in stable families. Even families that have both parents can also have “unwanted children”. With so many people growing up lacking the social necessities of life, when they reach youth stage, they may turn into doing anything in a bid to survive the harsh realities of life, including crime.
The issue of joblessness is also a thing I consider a national disaster.

Ticking Time Bomb!
With so many idle minds hanging around, full of energies and bursting with ideas, we indeed are sitting on time-ticking social Dynamite ready to explode any time. These are the people with minimal ignition will turn into ruthless, destructive gangs due to so many frustrations that they are harboring within themselves. History is a good lesson book where we can learn the power of idle mind lying around doing nothing. Those normally enlisted into criminal gangs in the name of Mungiki, Kamjesh, and MRC of late, etc when you look closely into them, they are normally young energetic people full of potentials only that they did not have a channel for them to tap their potentials. Without addressing the issue of joblessness properly, some things in our society will always be here with us. But it is also something worth noting that some isolated individuals may wrongly use the names of those organized movements to further their criminal activities while in reality have nothing to do with the said groups. They will only use the name, but do not belong there.
Many things in general are serving to make a real Social Dynamite waiting to explode, with devastating effect. Joblessness, lost faith in religion hence lost faith in God, over population and unequal distribution of national wealth, valueless education where we have many colleges offering degrees but cannot measure to the modern job market demands, etc are all contributing to having so many frustrated people in life. People feel angered by so many things that are happening in the society and who knows what might happen if an opportunity arises for them to release their anger?