This was a historical moment for Kenyans. We got to experience something that we have never experienced and got to hear things that we have never heard. I am sure we also learned vital lessons from our Honorable Presidential Candidates who displayed their wisdom, intelligence, eloquence and power to think equally fast! One has to admit for sure that this debate was extremely interesting, educative, entertaining too and it got millions of Kenyans glued to their TV screens and busy listening to their various radio stations. After all, we all were really eagerly anticipating for this debate.

But apart from just listening to the debate, what are the key issues that were addressed? Are there challenges facing the presidential candidates towards addressing the issues that got discussed? What can we do as Kenyan Citizens to see that the issues takes a more realistic and personal dimension regardless of who is voted in as our next president? Read on…


MAJOR ISSUES ADDRESSED
One this that I have to emphasize is the fact that we did not see any polarization between the contestants that would result to physical blows and that tell us one thing: despite our political differences or any other difference, we have a duty to maintain peace, love and unity.
Image from Jambo Net Blog. 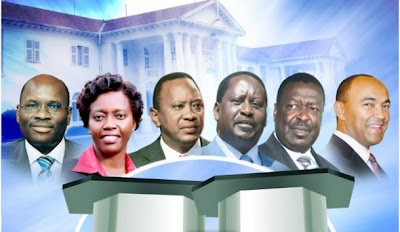 EDUCATION
The education issues was addressed and magnified by all the contestants with such clarity such that we cannot ignore proper and quality education for Kenyans. Education is of such importance towards ensuring a stable society; Knowledge is Light and can only be gotten through equal distribution of this great resource. Free Primary and Secondary education should be ensured for all in the society. Educational facilities should be increased and be more equipped so as to ensure that all who graduate from them have the proper knowledge to be able to face life challenges.
A properly educated society will greatly serve to minimize donor dependence as it will be easy for us to be creative, and it will enhance the power for self employment and this country will have great talents to manage it from local to national level.

SECURITY
Insecurity continues to plague the Kenyan Society with looming terrorism threats. With grenades going off now and then, police being the major targets for criminals, cattle rustling destabilizing whole communities like Pokot, Turkana, etc, people butchering each other as it recently happened in Tana Delta: we can have a real and tangible reason to believe that the person who will put an end to this menace will surely be the best President Kenya have ever had.
Security should be magnified by all means possible. Preach peace via churches, mosques, schools etc. Enhance the security sector through proper training, availing necessary equipment to deal with criminals, increase the number of police force and posts, stream line the security sector (Get Rid of “Waiganjos” perhaps) etc
For more factors contributing to insecurity in Kenya read KENYA INSECURITY: The Gathering Storm!. A complete analysis of the factors involved in Kenya insecurity.

PUBLIC HEALTH
The other day, nurses went on strike for some time and many people suffered and lost their lives as the nurses were fighting for their rights. We have very few medics (Doctors, Nurses, Clinical Officers etc) compared to Kenyans, etc. We also have few medical facilities e.g. Hospitals, Dispensaries etc which are also not properly equipped to handle the large numbers of people in Kenya.
I just loved the way medical care was put across, that preventive medicine should be the way to go than curative medicine and an equal emphasis on the need for people to eat properly! Thus why not conclude that we need many nutritionists to educate the public on that?

ETHNICITY AND TRIBALISM
“Kenyan People did not fall from the moon but must have come from a certain tribal region”. What a thought! [And I like it though]. The fight against tribalism however should begin from individual level to national level. Kenyans should strive to live as brothers and sisters. Tribal politics should be highly discouraged and we as Kenyans should desist from making tribal and inflammatory remarks that could trigger ethnical emotions and animosity. I wish Kenyans to stop seeing presidential race from a tribal angle but start seeing it as a way of getting the next president that will steer Kenya to unity and harmony and enhance national cohesion.

LAND ISSUE
Land issues were addressed in miniature by mentioning Migingo Island, which is debatable whether it belongs to Kenya or Uganda. But the truth is the land issue is more or less like Migingo as it is questions of who owns this land? Since when did he own it? Where did he get it from and from whom?
Just as settling the Migingo issue would ensure peace between Kenya and Uganda, the same case applies where settling the internal land issues would also ensure peace among Kenyans. Land issues are so emotive and could easily culminate to insecurity as people fight over land resources.
As Uhuru Kenyatta put it, proper land demarcation is the only way to solve the land crisis and ensure that the right owner is the one who finally gets that particular peace of land.

IMPUNITY
Martha Karua has been in the front line fighting against impunity. The fight against corruption should be intensified as it has contributed towards having the wrong people in public offices, has encouraged nepotism, discrimination, partiality and negative ethnicity too. The fight against this menace also should begin from personal level. Avoid bribes and favoritism, and you will surely win the war against impunity.
Corruption is among the reasons why Kenya is still lagging behind in many areas it could be competing with the most developed nations on earth.

MANAGEMENT OF PUBLIC FUND AND RESOURCES
Money paid by the tax payers is entrusted to the leaders to manage. How the money is managed has always been questionable as we have seen some areas seemingly benefiting more from public finds e.g. CDF as other areas continue to be poor. Peter Kenneth has brought a lot of development in Gatanga constituency and thus he is a good example of a good manager of public funds.
Also an important question was asked: Where is all the campaign money coming from to the scale of Billions? Can we trust our leaders to manage public funds for the benefits of common Citizens?

ICC AND HAGUE
I also do not believe that Kenya can be run from a distance by an absentee president. But again, aren’t the ICC suspects innocent till proved guilty? It is also in the power of Kenyans to choose who they want as their next president and this is regardless of the ICC cases. However, Kenyans must be ready to live with the consequences of their choice of the next president. All that matters is that peace should prevail, and our basic necessities as Kenyans to be met.
Other minor issues were also discussed.

IMPORTANT LESSONS LEARNED FROM THE DEBATE
1.    Kenya has achieved a great and significant milestone since independence by holding the first ever presidential debate. Congratulation to all Kenyans for coming this far.
2.    Kenya has also made a lot of progress in democracy for allowing public involvement in such a very important national event viewed and listened across the whole country via TV and Radio stations.
3.    Kenyan constitution has earned a real recognition amongst Kenyans for allowing such an important event to be aired live in media houses.

May the best Candidate win!
Also do not forget to read 8 FACTS about the intrigues of KENYAN POLITICAL games
An insightful analysis of the factors that shape Kenyan politics and how.

Did you find this article helpful? Then click the share button for your friends to read too. Thanks.
Posted by Kiasman at Tuesday, February 12, 2013